For those of you who know me personally, you know about me and pies. I would rather have pie than cake on my birthday, heck if we had found a pie that was anywhere near equal to my mother’s we would have had pie at my wedding!  Making a pie has been a baking goal for a long time, it is also something that has severely intimidated me…probably for equally as long!

For Mother’s Day my parents got me a new book:

I have baked from two of Martha’s previous books, Cupcakes and Cookies and been quite successful, so I decided for Father’s Day that I should bake my hubby a pie.

I bought all my ingredients and was home with them by 3:30 pm of Father’s Day. I started making my dough, according to Martha you need to make a Pate Brisee.  Little did I realize that the total refrigeration time for the entire pie would be a minimum of 2 hours. Needless to say, not much other than the dough got made on Father’s Day itself.  I made full use of Monday morning nap time though!

Here is my gorgeous pie in all its glory. 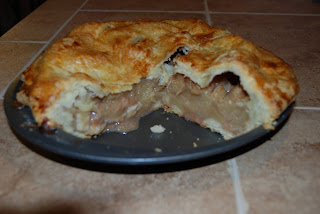 And what is Apple Pie with out Vanilla Bean ice cream?

The hubby’s only critique was that it was not sweet enough, and on this one I had to agree with him wholeheartedly. Martha calls for only a 1/4 cup of sugar and it needed anywhere from 1/3 to 1/2.  Have you baked anything out of Martha’s Pies and Tarts?

This successful pie gives me the confidence to try more a more complicated recipe next time! Now if only I had all the fancy kitchen gadgets that Martha recommends, maybe then everything in her books wouldn’t take twice as long as her recipes say they should!

Owner/Operator
View all posts by Melissa Dunworth →
This entry was posted in Uncategorized. Bookmark the permalink.